Guest presenters/discussants in Acquisition of Variation

Article in Journal of Language and Sexuality

Article in Spanish in Context 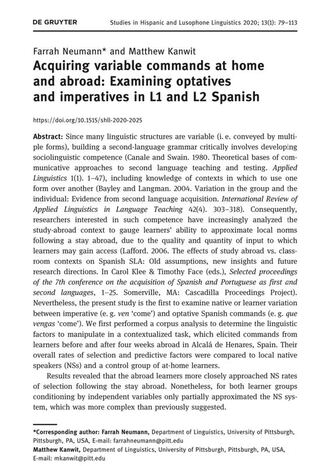 May 2020 - Pitt PhD student Farrah Neumann and I have published a new article in Studies in Hispanic and Lusophone Linguistics. We investigated variation between imperatives (e.g., come 'eat') and optatives (e.g., que comas 'eat'), comparing native speakers and learners in study abroad and at-home contexts. We include both a corpus analysis and the results of an elicitation task we designed.

Pictured: Juan, Margarita, and I at the conference reception following our presentations. 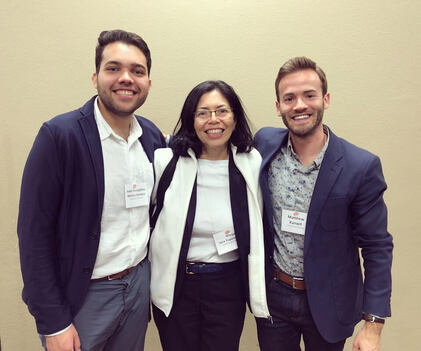 Pitt Linguists at SLRF at MSU

My presentation was invited for a colloquium on the acquisition of variation, along with Dr. Xiaoshi Li, Dr. Suzanne Evans Wagner, and Dr. Irina Zaykovskaya of Michigan State University and Dr. Kimberly Geeslin of Indiana University. I presented on how combining variationist and concept-oriented approaches enabled an analysis to tease apart critical differences between lexical futures and the present indicative, revealing learner development while also being informed by the historical development (i.e., grammaticalization) of relevant forms.
​
Pictured: (left) catching up with Virginia Terán and Ben Naismith at the end of a conference day; (right) with Kim Geeslin, midway through a running tour of the MSU campus to decompress following our presentations.

August 2019 - I'm proud to report that my first two advisees begin their full-time academic positions this month. Silvia Pisabarro Sarrió joins the University of Rhode Island in the Dept. of Modern and Classical Languages and Literatures as Full-time Lecturer of Spanish and Coordinator of the Basic Language Program. Virginia Terán begins her stint as Full-time Lecturer of Spanish at Georgia College and State University in the Dept. of World Languages and Cultures.
​
Please join me in congratulating Silvia and Virginia on emerging from a very competitive job market with roles they're thrilled to begin.
Pictured (left to right): Silvia at her new institution's sign and Virginia's new departmental photo.